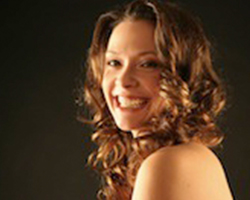 Daily Mail reporter, Claire Goldwin, put her investigative skills to good use when she began to realise in her early 40s that her usually fine hair was getting thinner with age. Taking advantage of Tweddell’s innovative use of hair extensions, Goldwin has assessed their effect on her own hair.

Hair extensions are a notoriously expensive treatment, frequently used by younger women who have both the time and the money to invest in the extravagance. Not only do they take hours to put in, they also require careful management on a daily basis, to ensure that they continue to look and feel good for the wearer.

However, Goldwin wasn’t looking for the standard, thick and lengthy extensions that are usually applied, and when she heard that Tweddell was simply using them as a filler to create volume rather than length, she was keen to give them a go.

Tweddell recognised that Goldwin’s hair was thinning and applied lightweight short extensions from the temples to behind the ears, where he felt that Goldwin’s appearance would benefit most. The results were better than Goldwin had anticipated and she loves her new hair.

But hair extensions have also been known to cause hair loss

It’s important to choose wisely when seeking hair extensions because, in the wrong hands, and over time, the results can be disastrous. Women have been known to lose hair and end up with scarred follicles that no longer produce hair.

It’s not the hair extensions themselves that cause the damage. An inexperienced or untrained stylist might attach the extensions too tightly, or too close to the scalp, which places the follicles under stress and the slightest amount of pulling will intensify the effects.

What can be done to minimise or prevent hair damage?

Well trained stylists will rotate the areas or groupings of hair for extensions, allowing follicles to rest between applications, if they are being reapplied. Regular maintenance by a good stylist will allow continual assessment of their impact on the scalp, and facilitate further treatment if issues arise.

Wearers should be gentle with their extensions – don’t over style and avoid pulling on them.
At the first sign of hair loss, follow it up. A stylist can help avoid further damage while continuing to enjoy great hair.

How to get your confidence back after chemotherapy

More than just a monthly annoyance: Periods and hair loss
Scroll to top