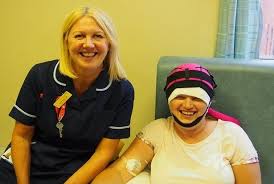 Scalp cooling caps burst onto the scene a couple of years ago, for the first time offering hope to patients that they might hold on to their hair during chemotherapy. We look at one woman’s personal account.

For years women facing cancer treatment were forced to face the fact that the harsh chemicals used during chemotherapy would see them lose their hair. As if fighting cancer wasn’t enough they had to go through the inevitable trauma of disfiguring hair loss. For some women, the prospect is simply too much with a shocking percentage declining the chemotherapy on those grounds alone.

Of course, it is not just the hair loss. It is the impact that hair loss has on their family and friends, children in particular. It is a stigmatizing visual sign that they are undergoing treatment which might as well be a neon banner for all its lack of subtlety. Combine that emotional trauma with the need to decide on how you want to deal with the hair loss, be it a wig, hat or a more brazen approach, and it is perfectly understandable why hair loss is always at the top of most people’s list of undesired and unpleasant side-effects… and there are plenty of others.

Meet Lesley Boyce. Lesley was diagnosed with stage 2 cancer in her breast and had to endure a series of 15 chemotherapy treatments. Lesley had actually worked in the oncology department of her local hospital in the north of England so had a better idea of what to expect than many of the patients there. When she was offered scalp cooling, using a cap donated by the charity Walk the Walk, she spoke to a former colleague for advice.

It was explained that the device simply cooled the scalp prior to treatment, and again for a while after, with the aim of reducing blood supply to the follicles and hopefully reducing the damage done to them by the chemicals used. As the mother to a young boy of seven Lesley had been worried about her appearance upsetting him if she did lose her hair and so had bought a wig just in case.

Lesley described wearing the cap as like having a refrigerator on your head and referenced how difficult it became to think while wearing it. She also pointed out that the need to wear it for an hour before and another hour after would turn the session into a 3-hour appointment from the 1-hour it takes for the actual chemo. The investment of all that time was rewarded as she managed to keep the wig in the drawer and the hair on her head.

Scalp cooling was and is an important weapon in the fight against hair loss, not least because before they came along there was literally nothing, they filled a void with something that works, as it did for Lesley, successfully in many cases. It is not a guarantee, but in life there are few of those.

Are There Genetic Clues To Hair Loss?

The Psychological Cost Of Hair Loss
Scroll to top