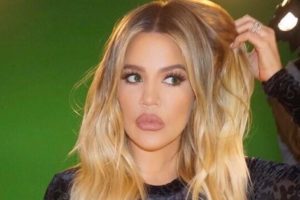 A recent news story claiming Khloe Kardashian is suffering from post partum hair loss has been revealed to be false according to Gossip Cop. The original article supposedly came from a source close to Khloe, claiming she was worried she was going bald.

Now, Gossip Cop claims to have got to the bottom of the story, insisting it’s completely false. Although they admit post partum hair loss can, and does occur in many women, the star isn’t actually at the stage where it would usually occur.

Post partum hair loss occurs after giving birth. It can take a few months for the hair to start falling out and it’s all linked to changing hormones. As Khloe is currently pregnant, she should actually be noticing fuller, thicker and healthier looking hair. It’s extremely rare for the hair to fall out during pregnancy.

When you become pregnant, the body produces a significant amount of estrogen. This pushes the hair into what is known as the resting phase, meaning it doesn’t fall out like it normally would. This gives the hair a healthy, full appearance. However, after giving birth, the hormone levels return to normal which means the estrogen levels drop. This triggers the hair in the resting phase to start falling out.

As it had a bit of a break during pregnancy, there’s now a lot more hair which needs to shed. So, it’s common for women to notice either significant thinning of the hair, or potentially even bald spots. It is only temporary though and the hair will return to normal eventually, but it could take up to a year.

Can anything be done for post partum hair loss?

While it’s not really possible to prevent post partum hair loss, there are temporary treatments which can help lessen its effects.

Topical treatments such as Minoxidil are fantastic. Applied straight onto the scalp, this treatment stops hair loss in its tracks and encourages healthy regrowth. If the hair loss is significant, a medication such as Finasteride could be a better option. Many women also choose to cut the hair shorter to create a more voluminous effect.

So, it seems Khloe Kardashian isn’t suffering from post partum hair loss after all. However, women who do experience the condition do have treatment options available. Above all else, it’s important to remember it’s only a temporary issue.

8 Ways to Lose Your Hair