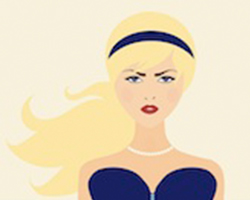 The prospect of losing your hair is a pretty big deal for most people, and while Beth Semikin, at only 22 years old, said she wasn’t too concerned about chemotherapy hair loss, she took steps to ensure that her hair got a good send-off before her treatment began.

Explaining that she was “taking ownership” of her hair loss when it happens, Beth transformed from a natural brunette to a platinum blonde, with some party pink for good measure, in a much anticipated trip to the salon where her cousin works – Headmasters in Surbiton.

Beth has been sharing her cancer experience for more than a year, after she was diagnosed with a rare soft tissue sarcoma – a cancerous growth between her pelvis and her spine – on her blog, “Tumour has it”.

She has updated followers on the challenges of a misdiagnosis – doctors thought her tumour was benign – until it grew back after being removed, and she had to undergo a second complicated surgical procedure, followed by specialist proton therapy at the UF Proton Centre in Jacksonville, Florida, over a period of three months.

Sharing her story through her blog has meant that hundreds of people sharing similar experiences have felt supported and reassured, while many well-wishing followers have provided her with the support that she needed in difficult times.

Brave Beth also met numerous other cancer survivors during her time in America and learned the value of being mentally prepared for chemotherapy’s most notorious side-effect. She says that she is not afraid of losing her hair, and reminds herself and others that it is a temporary loss. It will grow back.

However, by having some fun with her hair before it begins to fall out, Beth shows her optimistic and fun-loving personality – important characteristics in the face of a battle with cancer.

Team of Alopecia sufferers take on TV’s The Eggheads