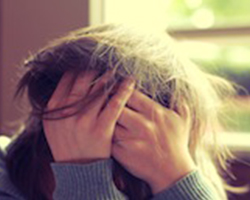 At just 18 years of age, Nicola Hanratty started to lose her hair. By the time she reached the age of 24, around 60% of her hair had completely gone. Now, she is using her experience to raise awareness of female pattern hair loss and how she managed to overcome it.

What is female pattern hair loss?

Female pattern hair loss is a lot more common than you might think. Thousands of women suffer from the condition, though usually it becomes most noticeable over the age of 50. As Nicola Hanratty proves however, it can affect women of any age and the psychological impact it can have is truly devastating.

It does affect the scalp differently to male-pattern baldness and is very rare for women to experience the same level of baldness as men. However, that doesn’t make the condition any less devastating to deal with.

The condition is thought to be caused largely by genetics, though there could be a hormonal link too. For Nicola, the cause was initially diagnosed as polycystic ovary syndrome, a condition that can lead to mild hair loss.

However, as her hair loss became more severe, it was later diagnosed as female pattern hair loss cause by increased levels of testosterone within the body.

Can it be treated?

The good news is there are many successful treatments available. For Nicola, she chose to cover up the problem with a glued on hairpiece. Each month, she goes to the hairdresser and has the hairpiece removed and re-glued. It has significantly boosted her confidence, though she admits she isn’t fully cured.

There are other alternatives. If you’re suffering from the odd bald patch, or an overall thinning where the scalp is more noticeable than it once was, SMP could help.

The high-tech treatment tattoos realistic looking pigments into the skin to mimic the appearance of hair follicles. It can be used to create either a full shaved look, or simply cover up patches of the scalp that are more noticeable.

Before seeking out any treatment for female pattern hair loss, you should get a diagnosis from the doctor. There are a lot of different types of hair loss and some are caused by underlying medical problems. Therefore, you need to know exactly what the cause is before it can be treated.