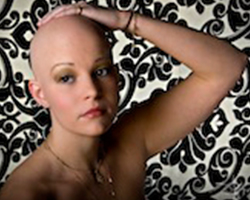 Losing your hair can be a devastating, embarrassing and confidence draining experience at any age. However, when you’re a self-conscious teenager having no hair can hit twice as hard, especially for girls. Most would be terrified, but Kent teenager Amy Harwood, has astonished those around her, not only coming to terms with the condition, but also raising £10,000 to find a cure.

No hair, no problem

Amy has proven to be a real inspiration to fellow sufferers. Determined not to let her hair loss determine her beauty, the teenager has even signed up with a modelling agency. She’s signed up to take part in a documentary for Channel 4 which highlights how young people have overcome adversity in order to become successful.

Amy first noticed her hair loss while on holiday. She had long healthy locks down to her chest and knew something wasn’t right when she discovered a clump of hair had fallen out around the same size as a 50p coin. After returning home, within a few months a hairdresser noticed more had fallen out and that’s when she decided to go to see a doctor.

Her hair loss continued over six months when she eventually ended up completely bald. Initially Amy and her family were understandably distressed by the problem. However, she overcame it quickly and has gone on to work for leading charity Autoimmune Alopecia Research UK (AAR-UK).

The AAR-UK is the first charity in the country to fund research into the autoimmune disease. It was founded in 2012, but started fundraising in 2013. As well as raising funds to put towards research, the charity also educates the public, as well as sufferers, about autoimmune alopecia. It’s a condition that’s on the rise so more awareness is definitely required.

As Amy proves, hair loss really doesn’t need to hold you back. By embracing and accepting it, it’s possible to achieve anything you want to.

Is Stress Affecting Your Tresses? The Female Hair Loss Epidemic
Scroll to top