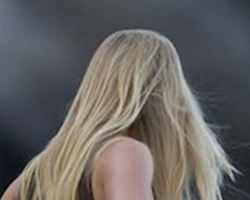 Hair loss is something you almost always associate with men. However, it’s actually a problem that affects a large number of women too. Journalist Antonia Hoyle has opened up about her experience with female pattern baldness and how it made her feel old and unattractive. Her open honesty about the topic is helping to break the stigma that comes with female hair loss which is actually more common thank you think.

Two thirds of women will suffer with hair loss

Did you know that two thirds of women will develop hair loss at some stage of their lives? The severity and degree of hair loss differs from woman to woman. Nonetheless, it’s still a common issue that’s surprisingly seldom talked about. A recent survey showed that 46% of women are so embarrassed by the condition that they keep it a secret, even from friends and family.

Journalist Antonia Hoyle claims she first noticed her hair loss in a photograph. She could clearly see the hair line in the middle of the scalp had receded by around an inch. After noticing the problem, she examined a little closer and found to her horror, that underneath the front section of hair, there was a strip that had clearly thinned.

From then she was terrified of losing her hair. At just 37 years of age she felt old and unattractive. She also did what so many others do – she turned to the internet for solutions. Some of these included vitamin supplements and even rubbing castor oil onto the scalp.

She eventually went to see a specialist and was diagnosed with female pattern baldness after undergoing blood tests to rule out iron deficiency and other potential causes.

While it’s more common in women over 50, it has become increasingly common in younger women. Stress is a major contributor, while iron deficiency affects around 20% of women aged between 19-34.

There isn’t really a cure for female pattern baldness, though there are treatments that can help. Minoxidil is one of the major, most effective topical treatments available and it’s advised you start using it as soon as you notice a problem. If you are suffering from hair loss, it’s important to remember there could be many potential causes. So it’s advisable to go to a doctor to establish the root of the problem.

How to nip hair loss in the bud
Scroll to top