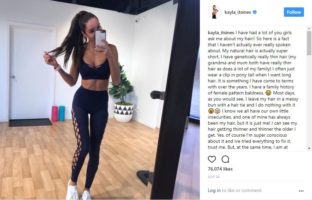 By speaking out, Itsines hopes to set a positive example and let young girls know that thinning hair isn’t something they need to be embarrassed about.

What is female pattern hair loss?

Australian based Itsines, who is most commonly pictured on Instagram with a long ponytail, revealed her hair is actually really short. The long hair seen in the photos is credited to a clip-in ponytail to hide her naturally thin, short locks.

She also went on to reveal she suffers with genetic female pattern hair loss. Although the majority of women are uncomfortable and embarrassed by their thinning locks, it’s actually a very common problem which affects millions of women across the globe.

It’s medically referred to as androgenetic alopecia and although it shares the same genetic link as male pattern baldness, it presents itself very differently. Instead of going completely bald, women with the condition tend to develop more of an overall thinning of the hair, with the parting also becoming wider with age.

Although it is more common in older women, it can actually start to develop in puberty. Many women who develop female pattern hair loss are ashamed and too shy to talk about it, especially young girls. So, the fact Itsines is openly talking about her own experience is a positive step to raising more awareness.

Hair loss treatments have come a long way over the years and these days women have numerous options to combat the effects of female pattern hair loss.

A treatment plan is typically created which first involves topical treatments such as Minoxidil. This will usually be used alongside hair booster treatments to maximise the results.

However, if the problem is more severe, there are other more permanent treatments out there. SMP (Scalp Micropigmentation), laser treatment and hair transplants can all be used to provide long-lasting results.  SMP can be particularly effective in creating the illusion of more volume by reducing the contrast between the pink scalp and the natural hair colour.

Overall, it’s important to note that there are many reasons hair loss can occur in women so it may not necessarily be down to genetic female pattern hair loss. Therefore, it’s important to get checked out by a doctor and have the cause diagnosed before seeking appropriate treatment.