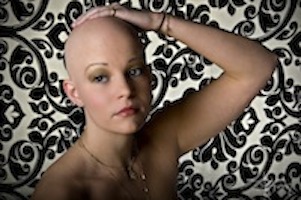 We all have moments of absentmindedness. As frustrating as it can be, it doesn’t usually have dire consequences. However, for one girl in Massachusetts, her hair really paid the price when she mixed up hair removal cream for shampoo and ended up bald!

Her sister, seeing the funny side of the situation, posted a picture for the world to see and shared it via her Twitter account.

However, many users who saw the photo are doubting its credibility. Could you really mix up hair removal cream for shampoo?

The picture, posted by Kayla Connors, has so far been retweeted 65,000 times. It proves as a useful reminder to “always check the label”. The question is, is it real?

Some users claim the sisters have used an image editor app to create the illusion that she is bald. This would put a filter on the photo, giving a bald illusion. If you look closely, the top left side of the scalp does appear to be “glitched out”, as one user cleverly pointed out.

There’s also the fact hair removal cream has a very distinctive smell. It’s unlikely you wouldn’t notice the smell and leave it on for the amount of time it would take to leave your scalp completely bald.

So it does appear as though the picture is fake. While the sisters were clearly posting the picture for humour purposes, this type of story makes light of a problem many women struggle with. Hair loss isn’t a laughing matter, particularly for those suffering from alopecia areata.

What is alopecia areata?

Alopecia areata is a type of hair loss that occurs when the body’s immune system starts attacking the hair follicles, sometimes leaving the sufferer completely bald. It’s uncertain why this happens and in most cases the damage to the follicles isn’t permanent.

However, it can be devastating for women when they start losing large chunks of their hair. It tends to mainly occur in those under the age of 20, though it can happen at any age.

The condition cannot be cured, but it can be treated. If you fear you’re suffering from alopecia areata, it’s best to see a doctor to have the condition properly diagnosed. You will then be advised upon the best form of treatment moving forward.

Could your hair loss be an underlying symptom of an STD?
Scroll to top