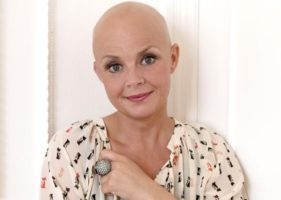 Scottish TV presenter Gail Porter who suffers from alopecia totalis recently revealed how she managed to cope after hair loss. Twelve years ago, Porter was in Las Vegas shooting for a paranormal television series; however something even more bizarre and completely unexpected happened – she lost all her hair overnight.

The hair loss was a huge shock to Porter who was only thirty four years old at the time; she recalled how the hardest part of it all was phoning her ex-husband and asking him to tell their three year old daughter that she would be returning home without any of her hair.

Impressively, the TV personality decided not to wear a wig and used her celebrity profile to raise awareness of her condition. She has done numerous TV appearances and documentaries where she has spoken to other sufferers of the condition. She also uses her social media accounts to stay in touch with her fans that are also suffering from alopecia and looking for advice and support on the matter.

What is Alopecia Totalis?

Unfortunately we do not know much about alopecia totalis currently, other than its believed to be an autoimmune disorder where the body attacks its own healthy hair follicles. Most of the time alopecia does not cause complete or permanent hair loss, however when people who end up experiencing almost complete hair loss they have a much smaller chance of hair regrowth. Porter has experienced some regrowth in the past but unfortunately it falls out again.

Last year Porter was offered the opportunity to undergo microblading; an increasingly popular technique which has been taking both the beauty and medical industries by storm. The procedure uses blades which are as fine as hair and ink. The blades are dipped into the ink and then used to create incisions in the skin, the resulting pigment deposition allows for extremely realistic looking eyebrows. Porter claims that microblading has helped her regain some of her self-confidence and allows her to feel as if she has her own natural looking face now.  Another option for Gail might be scalp micropigmentation (SMP).  The treatment is becoming increasingly popular amongst women.  By layering fine dots of pigment into the scalp a skilled practitioner can create the look of closely cropped hair.  Whilst it wouldn’t restore Porter’s locks it would give the impression that the shaven look was a matter of choice and not enforced by alopecia.

Alopecia: its causes and impact
Scroll to top