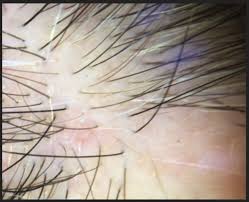 A respected doctor told a medical audience that Frontal Fibrosing Alopecia has become a serious problem. We look closer.

This rare inflammatory condition results in patchy and progressive hair loss which is permanent and thought to be an autoimmune disease.

Frontal Fibrosing Alopecia is what the medical world calls a pattern variation of this condition. In fact, it takes a doctor to spot the difference. The variation was only reported for the first time 30 years ago but, according to dermatologist Jerry Shapiro M.D., it is increasing in epidemic proportions.

It presents as a band of alopecia at the front of the scalp, it can appear above and behind the ears as well as sometimes forming a complete band around the head. Another symptom, which can occur before or after the hair loss, can be the loss of eyebrows… it occurs in between 50% and 95% of cases. Follicles are permanently destroyed by the condition in a scarring process that leaves

Typically, the condition affects post-menopausal women, like we didn’t have enough to worry about, but Dr. Shapiro told the American Association of Dermatology, at their summer meeting, that fully 20% of cases are seen in pre-menopausal women and that it can occasionally be seen in men, though they only represent between 1 & 2% of cases.

Exactly what triggers the autoimmune reaction which causes the disease is not known for sure, but there would seem to be a strong suggestion that the culprit has been identified.

Dr. Shapiro told the meeting about one study, based on questionnaires investigating lifestyle, social and medical factors, discovered that twice as many women with FFA used a sunscreen when compared with the control groups. Also that they used facial moisturizers and foundations more often, though this just failed to reach the level of statistical significance.

The possibly implicated sunscreen ingredients were approved by the FDA in 1988, just 6 years before the first ever case of FFA was reported.

Yes, well. At the moment there is no cure. Present with the condition to your Doctor and you may be prescribed any one of a number of tiered solutions to managing FFA. They include some you may expect, like minoxidil, to antimalarials and cortisone.

FFA is a terrible condition, causing the sufferer to lose hair, and usually eyebrows. Worse, hair is lost from an ultra-visible area usually immediately behind the hairline at the front of the scalp. The scarring nature of the condition means that it is irreversible.

It strikes us as all the more cruel since it is almost certain that most sufferers will only hear about it when they are given it as a diagnosis. Not difficult to empathize with anyone getting that news. We can only hope that the increased attention due to the efforts of Dr. Shapiro will bring a greater understanding and, in time, some bespoke and efficacious treatments for it. Though it might be quicker and cheaper to do the required research, identify the harmful ingredients causing the epidemic, and ban them.

Hair loss And the Menopause