WHAT IS FEMALE PATTERN BALDNESS?

Androgenetic alopecia is the most common hair loss conditions affecting women and it’s estimated that 50 per cent of women will see some degree of hair thinning by the age of 50.

Female pattern baldness presents slightly differently to male balding; rather than a receding hairline and loss of hair at the crown, women tend to experience thinning of the hair on the crown and a widening of the centre parting.

A receding hairline and thinning at the side and back of the scalp is more rare.

We have a number of hair loss solutions that can provide effective management of female pattern baldness.

Androgenetic alopecia is the most common hair loss conditions affecting women and it’s estimated that 50 per cent of women will see some degree of hair thinning by the age of 50. Like male pattern baldness, female pattern baldness, is the result of a genetic sensitivity to a specific hormone called dihydrotestosterone or DHT.

There are a myriad of different types of hair thinning in both men and women alike. However, as with male pattern baldness, it sadly, also exists in women. But what is pattern baldness in itself?

The absolute and most common form of hair loss is pattern balding, or pattern hair loss as it’s also known. On average, it impinges on half the male population by the time they reach 50 years of age and begins at the latter end of his twenties. However, in women it can be considerably different. Albeit that it can happen at any given age, it tends to be later on in life and doesn’t follow the thinning of the crown and temple, which is synonymous in men. 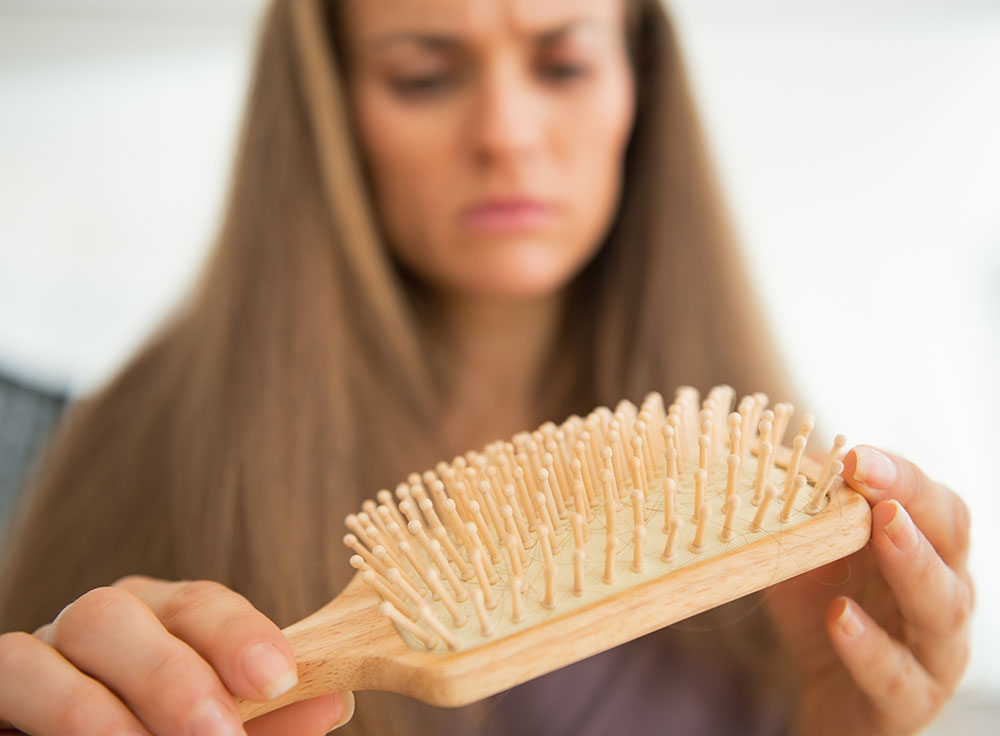 In female pattern baldness it generally will begin to thin on the top or the crown of the scalp. It usually starts with a widening through the centre parting in the hairline yet the front hairline in itself, remains intact. It’s probably also important to mention that pattern baldness in women can lead to total baldness, however, this would be predominantly uncommon.

One thing that is probably also crucial to remember is that female pattern baldness is usually not a sign of an underlying medical disorder. Many women say it the baldness affects their self-esteem and may cause anxiety but it certainly isn’t life threatening. However, sadly, it quite often is permanent.

Why Does Pattern Balding In Women Occur?

Albeit that hair loss varies with populations and cultures, it’s definitely a prevailing belief that hair loss is genetic. Additionally, it’s almost as much considered to be solely down to the Androgen Receptor gene that’s situated on the X chromosome that you inherit from your mother. Yet, despite having a distinct lack of palpable proof, the genetic footing doesn’t lie intrinsicly with your mother. It’s highly probable that hair thinning is courtesy of the inheritance of several genes that inherently carry a particular variant.

It’s also crucial to remember that this genetic adversity can also have an affect on the female population and is known as female pattern alopecia, however, it has a tendancy to take a different form. Generally, pattern baldness in women tends to thin over the crown as opposed to the temples. The causes in women are noticably less understood to those of male pattern baldness yet it has a tendancy to be associated with hormones and in particular the menopause.

What is the Ultimate Solution for Pattern Balding in Women?

Unfortunately, if women experience the occurrence of pattern balding, the effects are irreversible. The solutions lie in the form of learning to live with it or possibly considering a hair transplant. There are various options that you will need to discuss with your surgeon about the different types of transplants available and these will include :