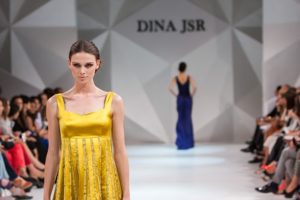 In the beauty industry, we have seen many times that history ends up repeating itself. Last year many fashion runways attempted to bring back one of the biggest beauty styles from the eighties – tightly slicked back hair. As New York Fashion Week takes off, judging by the first few days we can assume that nineties hair fashion is now making a comeback.

One of the most prominent hairstyles seen on top models such as Bella Hadid was the stretch comb. These are an alternative to headbands and keep hair slicked back all the way around the hairline and can be partnered with high tight ponytails.

Tom Ford models were seen wearing thick elastic headbands which were made of leather, like the stretch comb these headbands also hold back hair from the hairline.

Alex Wang took its take on powerful women, models wore collar fitted office shirts and had hair tightly combed back with gel, held in place with a redesigned custom clip which resembled banana clips and claws.

The Dangers Of Traction Alopecia

Traction alopecia is a form of hair loss which is caused by prolonged pulling on the hair follicles; this condition can develop if hair is repeatedly worn in the same tight hairstyle. Unfortunately, all of the hairstyles described above rely on pulling the hair back away from the hairline and can cause hair breakage and inflammation in the hair follicles.

The best way to treat traction alopecia is to prevent the condition from developing altogether. Those who have long hair are advised to stick to loose hairstyles or to change their hairstyles on a regular basis instead of making the same style daily. If the condition is detected early enough, hair loss can be reversible. However if the condition has progressed, the only treatment available would be a hair transplant as the hair loss is permanent.