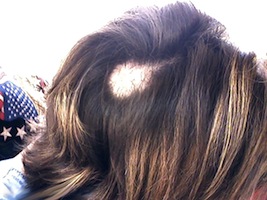 Another celebrity has revealed her issues with hair loss: this time it’s Erin Bateman, a contestant in the Australian version of Married At First Sight, who revealed her struggles with Trichotillomania on her Instagram account.

Trichotillomania is a particularly self-destructive obsessive compulsive disorder: simply put, it’s the compulsive urge to pull out your own hair, chiefly on the scalp, eyebrows and eyelashes.

It usually flares up in the tweenage period, and it’s generally considered to be a stress or depression-related illness. While most people who suffer from the condition get over it as they get older, some don’t. And while most older sufferers snap in and out of it, severe cases can result in major hair loss.

As no two cases of Trichotillomania are the same, treatment of the ailment varies. Usually, the first course of action is to consult a psychiatrist, who will dig around for any root causes that the treatment of which may nip in the bud. Unfortunately, there is no effective medication for the problem: it’s a purely psychological ailment.

While Erin begins her battle to take control of her compulsions, she might want to think about joining the thousands of women who have benefited from Scalp MicroPigmentation treatment.

While SMP was developed originally for men, it became clear very early on that the technique of applying highly specialised pigments to the scalp was highly effective in providing a look of additional density to the top and back of the head.

As most female hair loss conditions are temporary – including trichotillomania, if you can find the right psychiatric help – SMP is a perfect solution: not only does it provide ‘camouflage’ over the recovery period, it causes no damage whatsoever to your follicles during that time. For more information, consult our hair loss treatment options page.

What is PCOS and why does it cause hair loss?