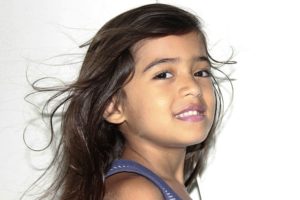 An eight year old girl from Wisconsin America took to Facebook to ask for a new wig for the start of her new school year. The story went viral and was instantly picked up by a local TV news station that aired Jimena Diaz-Vazquez’s story. As a result, there was an overwhelming response from the community with kindness, compassion and offers to help out the young girl who had lost her hair at the age of five due to alopecia areata.

People have cut and donated their own hair

One local wig business has now even offered to donate a wig to Jimena, where she initially went for a fitting and is now waiting for the wig to be cut to a style that she is wanting. Meanwhile many people have even cut and donated their own hair, which Jimena says she will donate to other children who are suffering from hair loss like her.

Jimena was only five years old when she lost all her hair to alopecia areata. Due to this condition, Jimena will need wigs for the rest of her life. However thanks to the outpouring of financial support from her community, her family have set up a donation site for her. The money raised from the donations will go towards Jimena’s wigs in the future as she grows older.

What Is Alopecia Areata?

Alopecia areata is an autoimmune disorder which can cause patches of hair to fall out. Although rare in children, it can affect both male and female children as young as eighteen months old. The condition is due to the body’s immune system attacking its own hair follicles causing hair to fall out. It is characterised by round or oval patches of hair loss which are completely smooth but the severity of the condition differs from person to person, it is also impossible to predict whether hair regrowth will occur and whether it will be permanent.

Is it true that hair falls out in Autumn?