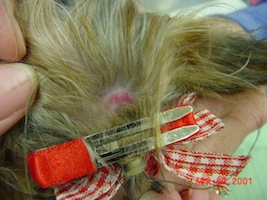 Maria Fischer recently shared her story online about battling with traction alopecia. Maria had been wearing hair extensions for over ten years without a problem, until she realised that chunks of her hair had started to fall out.

She was unsure, confused and understandably worried about dealing with sudden hair breakage which led to her doctor cutting a patch of skin from the side of her head to be sent off and examined in a laboratory. Hair specialists examined her hair follicles under a microscope while her doctor explained they need to determine whether her hair was still actively falling out.

One week later, Maria received a phone call from her doctor who explained that she was suffering from traction alopecia. Initially without fully understanding what her doctor had said, Maria was afraid that ‘alopecia’ meant her hair loss would be permanent and continuous – the distressing symptoms associated with the autoimmune disorder, alopecia areata.

What is traction alopecia?

Traction alopecia on the other hand, can be a temporary and reversible condition if caught and treated in time. The hair loss is down to excessive force on the hair follicles, which can be caused by tight hairstyles, tight headgears and hair extensions.

After years of hair extensions and bleaching, Maria had to give her natural hair and scalp a rest. She immediately stopped wearing the extensions and exposing her hair to unnecessary chemicals and looked for solutions and new styles she could feel confident in.

One year on, she now finally feels confident again in her natural beauty and appreciates her own healthy and growing hair.

Post-partum hair loss: can your hairstyle make it worse?

Eyebrow wigs have the internet divided
Scroll to top