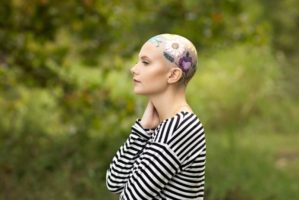 Inspiring high school student, Madisyn Babcock managed to win the internet in a major way as her senior photos went viral. She chose to challenge beauty standards and educate people about alopecia through her photos.

Earlier this year, Babcock who is only seventeen years old noticed that her hair had begun to thin out. Eventually the hair loss worsened and the teenager had started to get large, bald spots on her scalp, leaving her with no choice but to shave the rest of her hair off.

Usually, Babcock would wear a head cover or scarf so that she could hide her bald spots. However when it was time for her high school senior photos, Babcock decided to use her photographs as an opportunity to celebrate her uniqueness and as a way to raise awareness about alopecia. Alopecia is an autoimmune condition in which the immune system attacks itself and its own hair follicles by mistake, causing hair to fall out.

No need to hide behind a wig

The opportunity gave Babcock the chance to realise that although hair can be pretty, having it doesn’t make you pretty. Instead of hiding behind a head cover or wearing a wig, she asked her mother who is an artist, to draw some elaborate flowers onto her head and had the pictures captured by a professional photographer. She wanted to make a statement which made people think about how they position and think about people who have lose their hair, during the process Babcock ended up embracing and embellishing something that many people would have felt embarrassed or self-conscious about.

The teenager spoke about how she used a floral design on her head as symbolism for how she has blossomed into a new person and revealed herself since she developed the autoimmune condition. In America alone, the National Alopecia Areata Foundation estimates that almost seven million people are suffering from alopecia.

To learn more about what alopecia areata is, speak to a hair loss expert for more information.