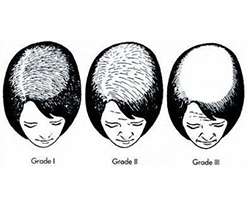 It’s a fallacy that just men experience the progressive hair loss condition androgenetic alopecia. Although it is true that men are more likely to experience this problem at an early age, with 40% of men seeing the signs of hair loss by 35 and 65% by the age of 60, women usually see the problem – known as female pattern baldness – start to occur later on, in their 50s and 60s.

What is the difference in androgenetic alopecia in women and men?

Androgenetic alopecia is commonly known as male pattern baldness in men and female pattern hair loss in women because the hair loss tends to follow a pattern. However, they typically follow very different patterns.

Both types are caused by the same problem – a genetic sensitivity to the male hormone known as dihydrotesterone that attacks the hair follicles, causing them to produce progressively finer, thinner and lighter hairs until the follicles eventually stop producing hairs completely.

There are two hair loss medications that have FDA approval for treatment of androgenetic alopecia in men. Currently, Propecia, also known as finasteride, is not approved for women because of the damage it can cause to male foetuses, but studies are being performed into whether it is safe if combined with high dosages of oral contraceptives. Rogaine, or minoxidil, on the other hand, is suitable for women and is often thought to be more effective for women than men. It is recommended that women only use the 2% minoxidil concentration rather than 5%.

For more advice on female pattern baldness and treatments, make an appointment with our female hair loss expert.

Hair loss drugs: are they suitable for women?

Female Hair Loss FAQ: I’d like to try a natural approach to my hair loss....
Scroll to top