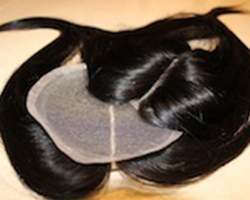 Hair extensions and weaves are an incredibly common and popular choice for women when it comes to creating their preferred style. Of course this doesn’t mean they are entirely risk free, as Janet Muir found out when her weave caused hair loss.

In 2014, Janet got a £250 weave to add body to her own hair. But her scalp was so badly damaged after three visits to a hairdresser that she has been left with alopecia.

The 50 year old said: “I have thin hair and had a weave fitted before. I was so pleased I wanted to have it done again.

“When I went back to have it taken out, I said I had read that an 8-to-10 week break was advisable between weaves. But I was told it was fine to have a second one without an interval. A lot of my hair was coming out when it was removed but when I raised concerns, Stacey told me you lose hair from your head every day.”

After several weeks Janet was shocked at how little of her own hair was actually left. The extensions that had been put in felt loose and she complained. Janet ended up going to another salon to have them removed and found that there was a great deal of damage to her scalp.

Before the weave had been put in Janet had a small patch of psoriasis on her head and the weave had exacerbated it and caused traction alopecia.

Janet had to spend a lot of money to see a trichologist in a bid to save what was left of her hair. She eventually involved a solicitor and won £1500 towards the cost of the weaves and treatment she required.

The hairdresser denied that her work had been the cause of Janet’s hair loss. But the trichologist who examined Janet’s hair believes that the hair breakage, loss and scalp damage had been caused by the weave fitted.

It is expected that the damage done to Janet’s scalp will take approximately two years to recover. If you are interested in getting a weave or extensions then you should spend a good deal of time researching care, products and hairdressers. If used correctly weaves can provide a platform for your hair to grow but incorrectly they can result in substantial damage and hair loss.